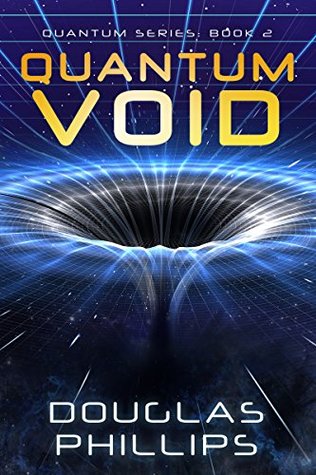 An astrophysicist’s experiment into the nature of the universe leads to an explosion that thrusts her and her partner into another dimension. Meanwhile, Romanian scientists capitalize on new dimensional technology. These two conflicting motives coincide.

Quantum Void by Douglas Phillips takes some theories in astrophysics and turns them into an interesting and engaging story that illustrates a creative application of the theory. In a sense, the book is both grounded in science while at the same time telling a great story.

Much of popular science fiction today ignores the science part in favor of action and suspense, so the more theoretical aspects aren’t discussed except in passing or in some nod in order to establish some kind of legitimacy for the plot device. Whatever the reason for the dearth of actual science in science fiction, it’s clear that Quantum Void and other books more grounded in science can still be enjoyable and successful without too much exposition dragging down the story.

Cixin Liu and his books come to mind, and his success shows that writers need not fear isolating their readers by adapting theory into fiction for their audiences.

There’s a lot to like about Quantum Void. The alien visitors and the other alien species that humanity comes in contact with prove to be helpful, and their advanced societies (or enormous planet-sized sentient computer) are mysterious enough to inspire the imagination.

What makes this story exciting is not that the book relies on actual scientific theory but that the fictional application of the theory makes it plausible, however improbable. That’s unlike other science fiction stories that just favor using trite plot devices like warp drives to traverse vast distances.

However intriguing the alien characters are, there aren’t enough pages devoted to revealing their mysteries. By contrast, the protagonists of the story are all scientists. While this is necessary for the story, their focus on the theory does tend to make them less relatable to readers. For instance, readers don’t learn much about Thomas’ personal life until the very end, when they learn that he does indeed have one. Perhaps this point would have made his character more endearing and impactful when Nala and Thomas fall into the void.

Quantum Void by Douglas Phillips is an enjoyable sequel and continuation of the Quantum series. The consequences of Nala’s experiment and the insight gained from her experience has the potential to expand humanity’s understanding of the universe and ability to travel across vast distances, opening up the series to go into limitless possibilities.