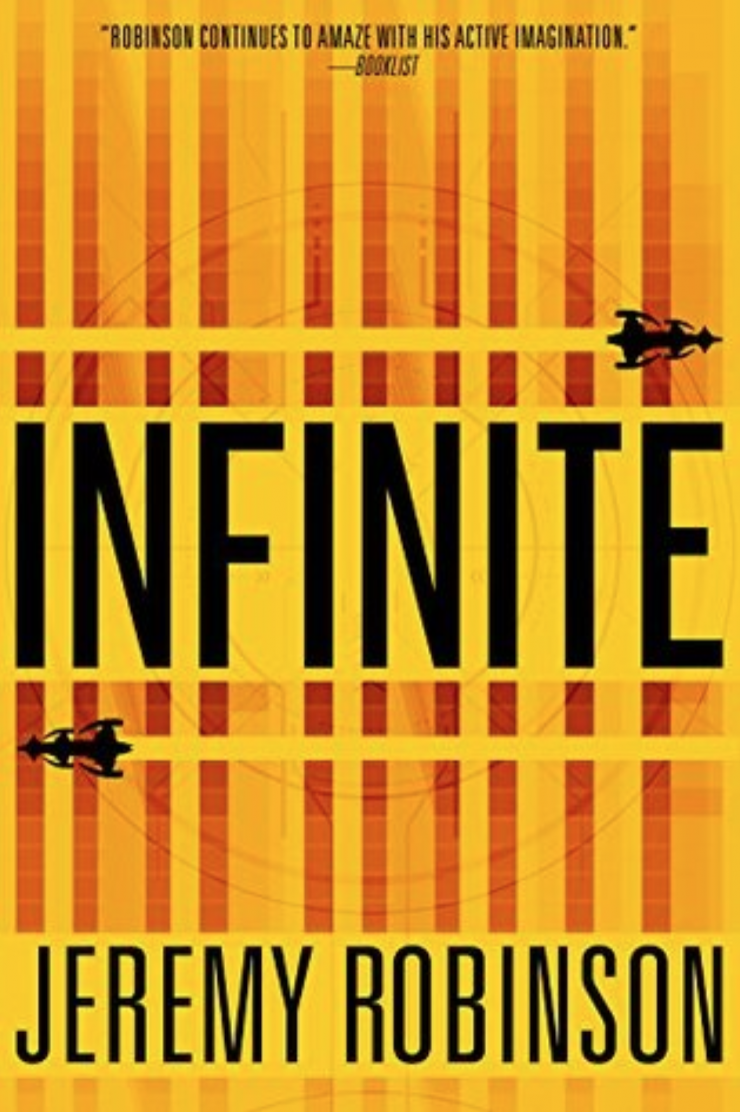 William Chanokh wakes up from cryogenic sleep to an attempt on his life by Tom, a computer scientist gone mad from the long, cold sleep. William must learn all of the changes Tom made to the ship if he wants to survive as perhaps the last human in the universe. What William discovers will change his understanding of the universe.

I didn’t have any expectations when I started this book. I had neither heard of the author nor the book.

The result is that I really enjoyed the story in Infinite by Jeremy Robinson. It feels like there’s two stories in here, and the transition from one to the next feels a little clunky, but the foreshadowing was present throughout the book.

Fans of more cerebral science fiction will enjoy Infinite because the story asks readers to reconsider their definition of sentience and invites readers to question the nature of reality.

William Chanokh wakes up from cryogenic sleep to find himself one of the last survivors of humanity’s last chance to escape extinction. Aboard the Galahad, a faster-than-light ship, William has to defend himself against Tom, a deranged crew member, and learn how to wrest back control of the ship from Tom.

The story takes place on the faster-than-light colony ship Galahad.

Many science fiction books gloss over concepts like FTL without really providing anything more than a shallow description of how such travel is made possible. Infinite by Jeremy Robinson shares the same fault, but where it shines is its exploration of what constitutes reality.

Opting for a discussion and description of intelligence—references are made to the Turing test—the book explores the idea of a computer sentience. This idea isn’t necessarily new.

Gene Roddenberry explored this same idea through Data in Star Trek: The Next Generation. But Robinson takes this concept one step further and asks readers to consider the nature of reality, throwing a wrench into the characters’ definition and understanding of the universe.

But to get to that point, readers have to go through a fairly standard science fiction horror story of a man stuck onboard a runaway spaceship who is hunted by some predator.

This first part of the book isn’t anything special, and in fact, readers who stopped around here would miss out on the more interesting aspect of the book: what happens in the second half.

It’s the second half of the story that really makes this book shine—so much science fiction that shares a similar plot with the first half of Infinite end up being average or mediocre unless they’re couched in an already developed universe.

But the exploration of reality in the second half of the book sets it apart from all other horror stories set in space. Infinite sort of misleads readers into thinking it’s a horror story. But then it goes into a more philosophical discussion of intelligence and sentience. And then again it moves into a discussion of reality, something most readers wouldn’t expect.

And for going beyond what would have been an average story about surviving a horror in space, I really have a much better impression and appreciation for the book. The discussion of the virtual and of intelligence is layered throughout the part of the story, and a focus on these aspects of plot don’t really make sense until the book is done.

The writing can feel a little slow at times, but it otherwise flows. Patient readers will enjoy the conclusions the author reaches in Infinite, and it’s one of those science fiction books that makes us consider the possibilities about our own reality. And that makes Infinite a worthwhile read.