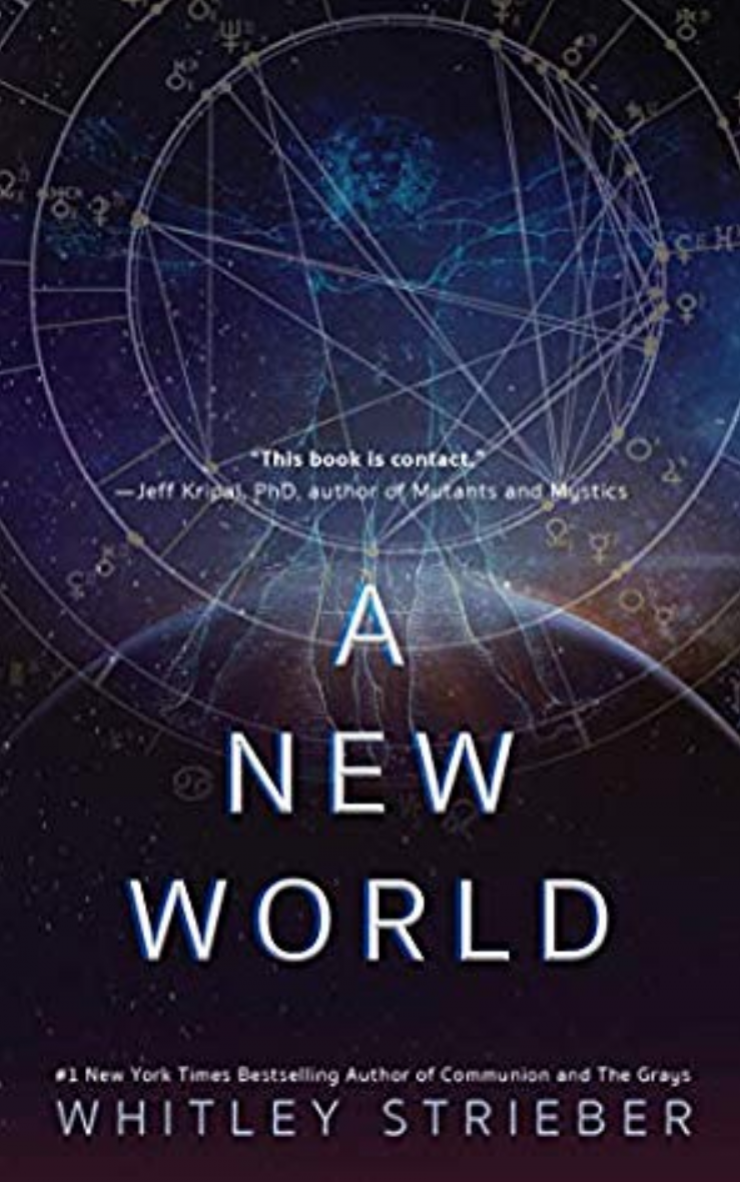 Whitley Strieber discusses the purpose behind the visitors and what communion might entail for humanity. Throughout the book, Strieber touches on various topics like parallel worlds, the nature of the universe, and other similar subjects.

Whitley Strieber’s book A New World, and his previous work, Communion, both show someone who is intelligent and articulate. What I found particularly interesting with this book is that the message of the new world is reminiscent of what other writers like Dolores Cannon, have written about regarding humans being brought to a new world.

Most of the claims in UFO books can be difficult to accept. My biggest criticism is that Strieber takes his time to get to the point. There is a lot of biographical information that is needed in order to establish his credibility. Readers of Communion will be familiar with the style, but I would have preferred a more direct approach with regards to the purpose of the book.

One of my biggest surprises of the book is that Strieber’s claim about the new world or different universe is so similar to the claims Dolores Cannon makes in her books regarding a new Earth. This new Earth, they claim, is one of beauty, serenity, and love. The environment, they claim, is clean, and the world is pure. And the people allowed there are only people who can reach a certain kind of vibration, namely people who are loving. Imagine that: a world where people care for not only for themselves, but for others and the environment around them.

Strieber offers some interesting ideas about this mirror universe, drawing some parallels between this current universe and the other universe. The ideas here are fairly similar to other ideas from people such as Cannon and perhaps even Edgar Cayce.

Many people will likely confuse Strieber’s fictional works with his other works, like A New World and Communion. Being a fictional writer doesn’t mean that all of his claims are made up.

There’s also a popular train of thought about the immortality of the soul, that people who die simply move their consciousness onto to another universe, allowing the soul to continue its journey and lessons. That may be a great comfort for some, and perhaps eases a bit the fear of death.

I would have liked to have learned more about some of the references Strieber makes in the book. For instance, Strieber mentions the US Navy statement about the Tic Tac UFOs in 2018. If he had any information regarding that incident, I would have wanted to hear it—even his opinions on that incident would have been enlightening. Other references in the book—the Sphinx, the Tic Tac UFOs, Sirius—all reinforce statements made by other writers and researchers. If these claims aren’t true, then they must be coming from some shared source everyone else is accessing.

Other discussions, like the parallel or mirror universe and the dark matter merited a lot more discussion than the brief mentions Strieber devoted to those topics. A longer discussion would have helped make the book more credible and interesting.

I’m not sure what to make of Strieber’s works. I’d like to believe that what he, and other writers like Cannon, say is true: that there is a greater reality beyond what we currently know, and that the beings in these realities are loving. After all, such a paradigm shift in our understanding of the world isn’t unheard of in human history. Galileo’s discoveries were also ridiculed at first.

Whatever the case, I found the ideas in A New World by Whitley Strieber to be very interesting. While I felt that parts of the book were slow to get to the point, Strieber’s style of writing is clear and his intellectual tone is reassuring. What’s surprising is the transformation in knowledge between Communion and this book—Strieber comes across as more knowledgeable, wiser, and even more spiritually mature because of his experiences. As for the validity of Striber’s claims, I’m not sure I’m convinced, but his message of tolerance, love, and peace should be taken to heart regardless.

Read reviews on other similar books below.