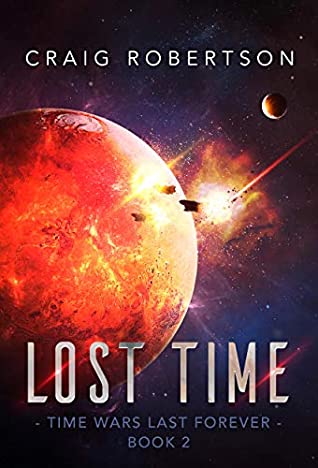 Lost Time by Craig Robertson is a fun sequel to his first book in the series, Ryan Time. The battle between Ryan and his two-ship fleet escalates to a seemingly certain conclusion until the quirks of time travel presents yet another conundrum to the entire war effort.

Time travel stories can be very confusing and seemingly pointless. With the power to traverse space and time, a person can prevent his own destruction. The same is true of the clan leader, who supposedly sees all of time, except perhaps his own future. A plot device that minimizes time travel dilemmas is the author’s use of not-timing, or erasing objects from time itself—past, present, and future, including all memories of an existence.

Such is the threat that Ryan faces. Outside of the protection of the super advanced time ship, Ryan would not even know he was losing if his friends were to be eliminated. This little fact adds a little obstacle to the story telling considering the humans on Mars manage to survive the destruction of Earth.

The plot continues with Ryan and his gang plotting ways to defeat a foe that is vastly superior in numbers, if not creativity and innovative. It’s Ryan’s breadth of experience and ingenuity, combined with the help and explanation of his artificial intelligences, that manage to prevent the non-existence of the galaxy.

But what makes the story engaging isn’t necessarily the sense of doom facing humans—Earth’s fate is sealed—but instead the engaging dialogue and banter among the characters in the story. If there’s one thing the writing can be counted on, it’s the engaging dialogue. Ryan’s bickering with his best friend Al, an artificial intelligence, and his easy-going attitude and jocular personality keep the story lighthearted and fun despite the dangers he faces.

Whereas Ryan is engaging, other characters in the story don’t seem to be as engaging as the protagonist. In fact, their roles and presence almost seem trivial—the survivors on Mars have not shown their purpose in the story except perhaps to serve as breeding stock for a new human civilization. The jokes about college students, hormones, and condoms do feel a little tired toward the end of the story.

In terms of the overall plot, there’s a lot of progress on the war front, but the ability to pause and manipulate time means that victory isn’t assured until the enemy is completely obliterated.

Lost Time by Craig Robertson is moves the plot of The Timeless Void series forward and introduces a new plot element that adds another layer to the story. The engaging dialogue and banter among the crew carry the story in lieu of a lot of plot advancement.

Read other reviews of fun science fiction stories below.