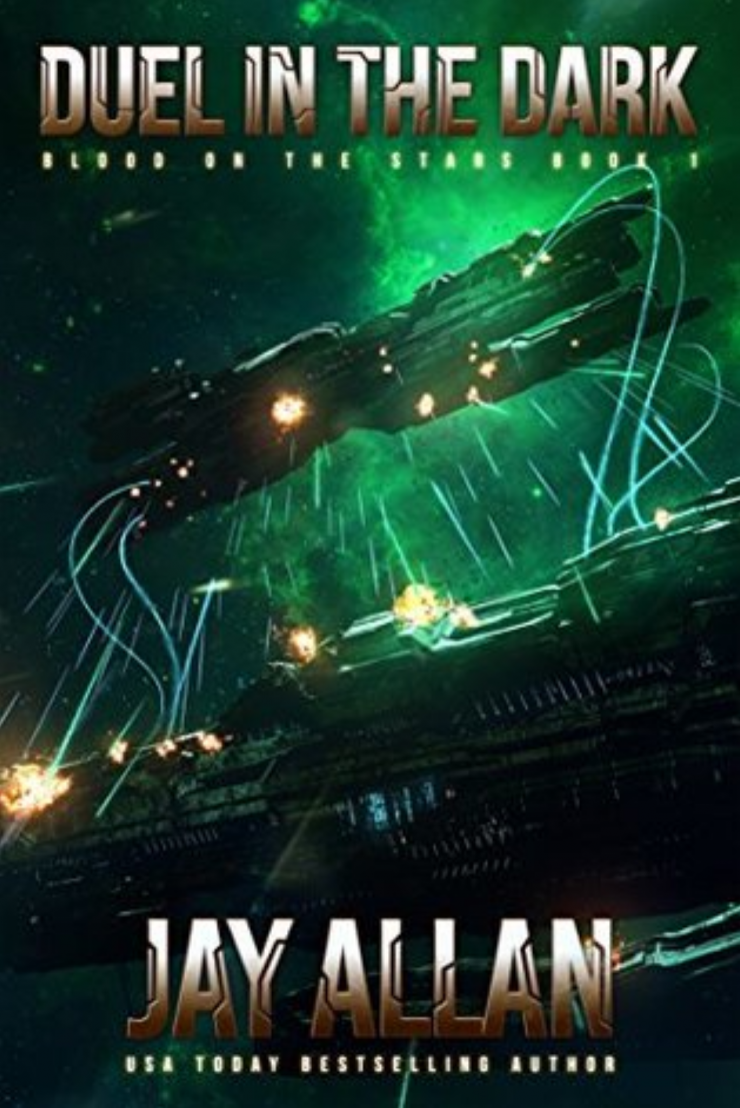 This book has combat between two battleships, dogfights between smaller fighters, and a bit of insight into the minds of the two opposing captains.

There’s a lot to like about Duel in the Dark by Jay Allan, but I think that discerning readers will find some of the faults too major to continue with the book.

Tyler Barron in command of Confederation ship Dauntless is sent to investigate a frontier system where the Alliance has sent Katrine Rigellus to probe defenses, attack Confederation ships, and seize a refueling colony in preparation for an invasion.

In space surrounding the a frontier mining colony.

Duel in the Dark Review

To start, One of the most confusing aspect of the book is Allan’s constant perspective switch between the Alliance, Union, and Confederation early in the book. Because there’s shift in perspective, readers just don’t know who to root for. Just who, exactly, is the protagonist and who is the antagonist? It’s unclear until much later.

The addition of the military powers and their backgrounds also make it difficult for readers to “choose” a side. For instance, we learn about the Confederation and its democratic, but corrupt government, and we also learn about the Alliance and its military dictatorship and oppression.

The impression I get is that we should support the Confederation and its more egalitarian governance, whereas we should shun the Alliance for its oppressive social hierarchy. So I should support Tyler Barron and the crew of the Dauntless.

But the Confederate Tyler Barron isn’t really someone readers can relate to. He’s born into a position of power because of his grandfather’s exploits in the previous war. While Katrine Rigellus was also born into a powerful family, she earns her command early in the novel with her attack on the weapons platform. When we learn about her courage and compassion for her crew, we feel more connected to her despite her government.

Katrine’s combat experience far exceeds Barron’s experience since it appears the Alliance is in a constant state of war. With her superior Invictus and experience, it seems like a simple enough matter to defeat the Dauntless.

If one of Allan’s purposes is to show that there’s no real winner in war, then maybe he’s accomplished this feat by showing giving us insight into the thought processes of both captains.

We’re told several times that the Confederacy and the Alliance don’t have much information about each other. But insight into both captains’ thoughts show just how much they can anticipate each other’s actions. This aspect of the writing seems too contrived.

Outside of this conflict of interest for readers, the actual combat descriptions are fairly enjoyable. One unique aspect of the story is the use of fighters on a battleship. Not many military science fiction stories use fighters paired with battleships. Many military science fiction stories opt for large capital ships with smaller escorts instead of fighters.

If you enjoy science fiction books with a military theme, then Duel in the Dark is a book that you should consider reading. The series promises a lot of action, and the idea of a galactic war that swallows not only the three major powers, but also the non-aligned worlds, make the story universe exciting.

The conclusion of the story isn’t surprising considering the barrage of reminders readers are given about the impending state of war. The story doesn’t really stand out in the military science fiction genre, but I still found it to be enjoyable.