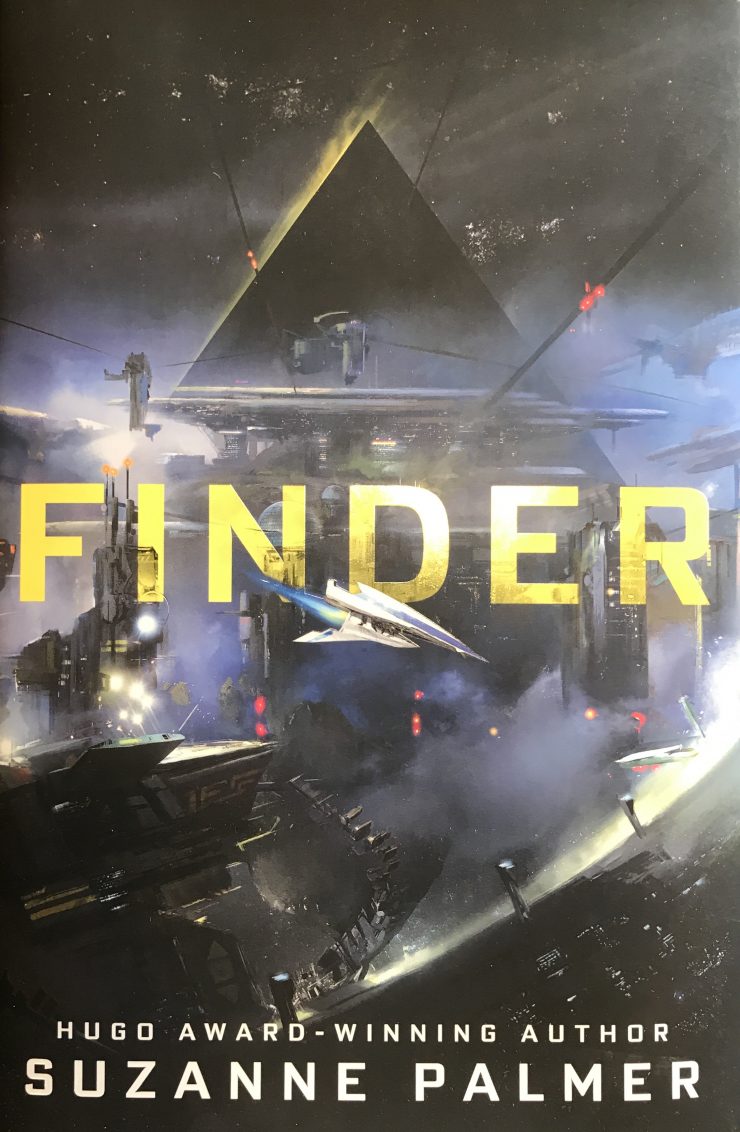 Fergus Ferguson has to reclaim a ship with an advanced artificial intelligence from a man who is using it to intimidate and consolidate power in some fringe colony.

Suzanne Palmer has won a Hugo Award for her short novel The Secret Life of Bots in 2018. If you’ve enjoyed that story and that writing style, then you’re likely to enjoy Finder as well.

Finder is Palmer’s debut novel. And what a story it is!

I didn’t know much about Suzanne Palmer, the Hugo Award, or the book when I first read it. However, I did see that the author had previously won the Hugo Award, so I thought I’d give the book a go.

I admit that I didn’t find the synopsis about Fergus being a repo man all that exciting. In a universe full of possibilities, technologies, ideas, and aliens, I wondered why would some story about trivialities like reclaiming property be interesting.

But I’m glad that my initial impressions of the book were incorrect.

Finder is the first book in The Finder Chronicles by Suzanne Palmer.

This takes him to a human colony on the edges of human space. There, he has to contend with different groups of people fighting for control over the colony and its small sphere of influence.

One of the leaders of the group, Arum Gilger, is using the stolen ship to consolidate and cement his power among the various factions.

Initially, Fergus believes he’ll go in, retake the ship, and leave. But he soon develops close relationships with the people around him, and as a result, he becomes entrenched in the local conflict.

The protagonist, Fergus Ferguson, isn’t your average starship captain. Nor does he even have a traditional military background like so many other science fiction heroes. Instead, he has the unique skill of finding lost items.

Arum Gilger, the antagonist, wants to be the warlord for Cernee and its surrounding region. And to do this, he uses the power of the Venetia’s Sword to intimidate people into giving up control.

And there’s Mari, daughter of one of the women who was altered by the aliens. Mari is almost like a daughter to Fergus, and her presence ties him to the community.

The story takes place in the colony of Cernee, on the edge of human space.

I didn’t think I’d be at all interested in Finder, but the more I read, the more I found myself becoming involved with not only Fergus, but Mari and the people of Cernee as well.

There’s just enough action in every chapter to keep you from putting the book down. The power struggle for Cernee between the various factions includes outright violence and fights. I wanted Gilger to lose. I wanted Cernee to be free of violence.

And the various groups that make up Cernee have intriguing stories as well. I wanted to know more about the Sun Shielders and their culture and beliefs.

The action gives the story a good pace. There was never a dull moment in the story as Fergus’ plans for reclaiming the ship unfolded. His attempts to avoid becoming embroiled in the local politics end up being futile. Ultimately, Gilger’s use of the stolen spaceship to impose his own will on the people of Cernee makes Fergus responsible.

Throughout the conflict, we get the sense of some of the technologies people have developed to deal with other people. One interesting piece of technology is the nanowire one of the groups uses as a trap. But others include the flying sticks and the alien technology used to change humans into cubes.

As the story progresses, we learn more about the groups invested in Cernee. It’s a community comprised of unions or trade groups working together for the benefit of the whole. Mari’s people provide the food while the Shielders maintain the solar energy network. Various groups (or gangs) exist for mining and for construction. And then there’s Gilger, who wants to control everyone.

The story involves a lot of scheming between the various groups. It’s almost like a grand strategy game with players plotting their moves many steps in advance. Fergus stumbles into this game, already in progress, and he has to learn the rules before he’s killed.

While the aliens aren’t part of this particular book, I found them to be intriguing. What are their motivations? What is their purpose? Their experiments on humans just makes them all the more ominous and mysterious. I hope they make an appearance later, as they’re the only intelligent aliens that exist in the book universe.

I was also curious about the artificial intelligence on the ship. While we don’t get much of Venetia’s Sword in this book, I wonder if the aliens modified the AI as well. If their purpose was to observe humanity, wouldn’t programming some kind of spyware into the ship’s intelligence be a good method of observation?