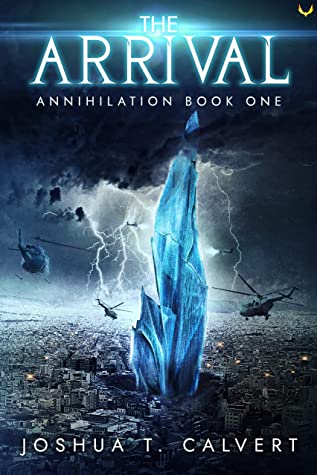 An alien fragment crashes into the land, forcing NATO to quarantine the surrounding area and trapping the people within. Niko must survive the quarantine and learn the secrets of the aliens before Earth is destroyed.

Arrival by Joshua T. Calvert has a slight twist on an apocalyptic story wherein humanity is just a casualty in a conflict between two powerful warring forces whose goals for humans, if any, remain mysterious.

The unique perspective of the story is that humans aren’t at the forefront of the conflict, fighting for their survival as a species. Instead, people are victims of a war waged far above their heads and beyond their comprehension.

That’s the environment readers find themselves in throughout the story—always, like the characters, wondering what’s going on and why the aliens are in the solar system. The absence of information only leads to more questions. Why are they here? Why haven’t they wiped out humans? Why are they fighting? That they’re basically ignoring humans and otherwise avoiding the destruction of the planet has some pretty terrible implications.

What descriptions readers are provided of the aliens only serve to increase the aura of mystery surrounding them. The description of the shard, the effects of its presence on the ground, and the discussion of its interior all lead to the undeniable fact that these aliens can easily destroy humans, yet they haven’t directly done so.

The story revolves around a kindergarten teacher named Nikos who manages to avoid being killed in the initial catastrophic event. This fairly mundane background deprives the character of some more interesting skillsets that many science fiction writers would prefer in their characters. These skills include weapons and tactics, and their absence reveals that the story is less action-oriented.

Instead, Nikos’ main ability is empathy, and it’s this ability that sees his survival despite the turn of events that occurs during the first half of the book where readers are introduced to a vision of what the world could look like if the aliens turned their attention to Earth instead of each other. It’s not good.

While Nikos feels more relatable than the tough professional soldiers that are the mainstay of military science fiction stories, he does feel a bit too static as a character in the aftermath of the initial event that traps him.

Even though Nikos isn’t a soldier, the action scenes in the story are described well enough, and his inexperience does add to the sense of suspense and drama since he needs to be protected by soldiers in the second half of the book, which broadens the scope of the story and reveals the state of the world to readers.

That transition to the second half of the story does feel a bit abrupt, with a chunk of time that passes pretty quickly and leaving readers feeling a bit disconnected.

Read reviews of other apocalyptic science fiction stories below.