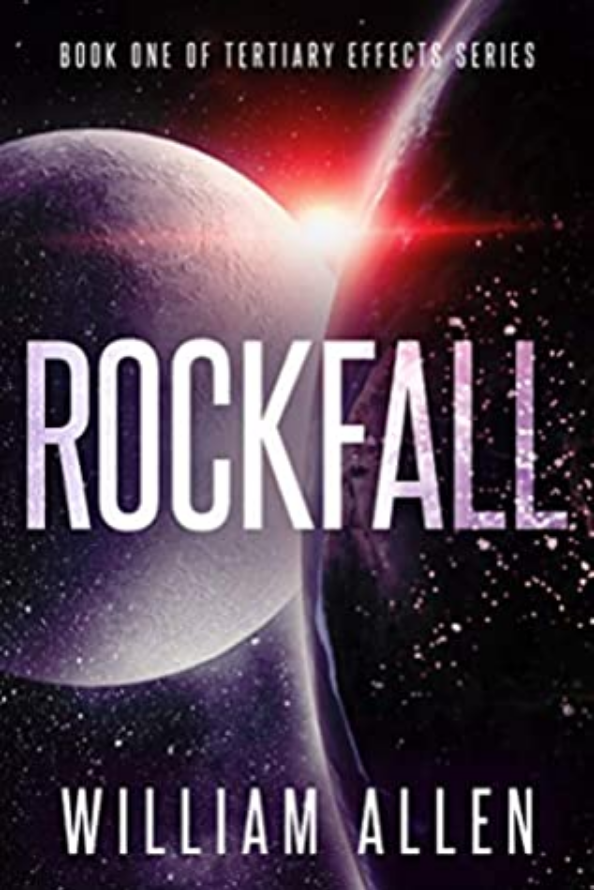 An enormous rock hits the planet, obliterating a chunk of the planet and killing millions. Bryan Hardin struggles to survive the effects of the planetary catastrophe.

Rockfall by William Allen establishes a great story foundation for the rest of the series, which promises a plausible and engaging post-apocalyptic story brought about by a rock strike on the planet.

Perhaps the story’s greatest weakness is the slow start and progression. Readers who want to be entertained with action and battles should look elsewhere, though that’s not to say that action doesn’t exist. On the contrary, Rockfall provides readers with some realistic action scenes and the consequences of those decisions and actions.

In terms of realism, Allen seems to capture the feel and politics of small-town life fairly well. Corrupt authority figures and a tight-knit community wherein all the characters know one another seem like a good setting for this type of story. Despite the tight-knit community sense, there are still some antagonists.

I’m not too knowledgeable about guns, but those who are may appreciate the amount of detail about the gun fights. What’s nice about these details is that unlike many stories or characters who fire weapons, Bryan, the protagonist, practices situational awareness, with one scene particularly illuminating his focus and skill.

What readers will appreciate is that the gradual pacing of the story creates a sense of impending doom. The anxiety that Bryan feels is very similar to the general sense of anxiety and fear during the early days of the shutdown for COVID-19. But unlike those who hoarded toilet paper and cleaning supplies, Bryan approaches the situation with a rational mind. The whole narrative, told in the first person, is well-reasoned and logical as a result.

The lack of information regarding the coronavirus, the panic buying, the fear, and the rumors were all in the back of my mind as I was reading the story. I couldn’t help but imagine that Bryan’s situation, however fictional, was all too realistic. After all, the media revives the terrifying prospect of a Yellowstone eruption or the “Big One” hitting California every few years.

Fans of apocalyptic or post-apocalyptic stories are already likely familiar with survivalism and prepping. After all, numerous zombie apocalypse shows encouraged thinking about survivalism. And in that sense, Rockfall reads almost like a journal of one man’s well-thought out process for surviving a catastrophic event.

Bryan’s preparations seem reasonable enough for both short-term and long-term survival, though the story includes some obstacles that seem a bit arbitrary, like the news censorship in an era where it’s nearly impossible to hide data from those who seek it.

The conclusion of the story leaves readers with a desire to learn more about Bryan and his small town. The subsequent effects of the initial impact don’t appear to be giving the characters much respite, and the story foreshadows much more hardship ahead. That’s not good for the characters, but it makes for a good story for readers.

While I believe that Rockfall is a bit slow on the buildup, I appreciate the foundation and universe that William Allen is building in this first book of the Tertiary Effects series. As the story progresses, readers see a slow degradation of law and order, a degradation that at times feels all too realistic given the current societal and political atmosphere in the United States.