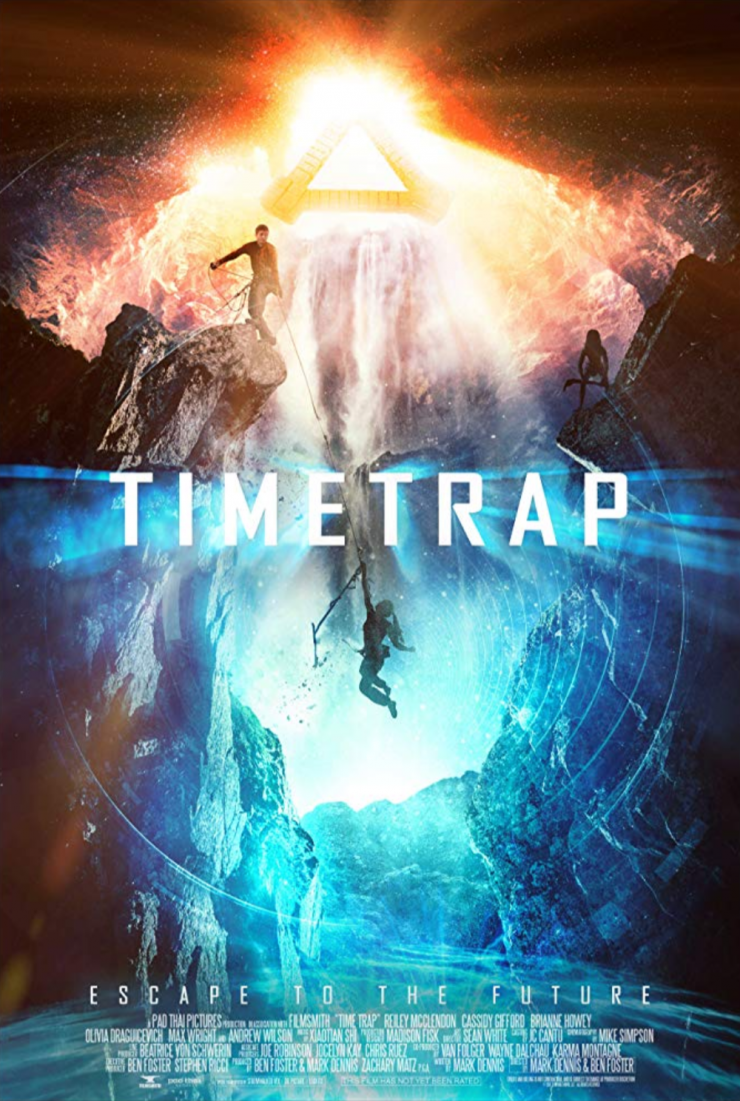 Two graduate students search for their professor who in turn went missing looking for two hippies in a cave system located somewhere in Texas.

Watch this movie if you

Avoid this movie if you

Time Trap is a refreshing take on the theme of time that can sometimes be a bit tired.

If you’re looking for an interesting science fiction movie, give this one a shot. It has an interesting plot and fairly solid story, and the acting is better than expected.

Jason Hopper, the archaeology professor, is played by Andrew Wilson. His two students, Taylor and Jackie, are played by Reiley McClendon and Brianne Howey.

Other characters include Cara, played by Cassidy Gifford and Furby, played by Max Wright.

The movie takes place primarily in a large cave system somewhere in Texas.

I was expecting a low quality production of a science fiction film. Instead, what I got was a riveting plot that makes up for any perceived deficiency of the movie.

I really enjoyed the gradual reveals of surprises and plot elements as the story progressed. It’s done in a well-executed manner. As we learn of these plot elements, we share the fears and realizations that the characters must feel as well.

There are a few scenes that I really enjoyed in the movie. These scenes reminded me of scenes in The Time Machine (2002) where the protagonist, Alexander Hartdegen, sees the Earth’s future. It’s not pretty.

Seeing the armored people make a presence was also pretty interesting, as they raised some questions about the technological level of people outside.

From these scenes, we also learn a bit about the future of humanity.

Movies that have just one setting can sometimes get boring quickly. A singular setting like a cave is especially noticeable if the story or acting is weak. Luckily, neither are the case for Time Trap.

Having the characters become trapped after climbing down is a good way to prevent them from going back up. But once we learn about the time mechanic, it’d be pointless to return anyhow.

My one criticism is the character Furby. His creepy behavior is dismissed as a consequence of teenage hormones, but even so, it was a little unsettling for me. For instance, when we first meet him, Furby lightly brushes his fingers down Jackie’s arm. I’m not sure if there was a need to have a comic relief character in a science fiction movie (or book, for that matter).

I do feel some sympathy for the character, however. His change of behavior when he’s with the group to when he’s apart makes me feel as though he’d be more sympathetic and relatable without the creepiness.

As the group of students explore the cave, they stumble across other travelers and explorers who are trapped. We see a sampling of history represented through the victims. Cavemen, conquistadors, and some technologically advanced civilization make an appearance.

One curiosity is the presence of the conquistadors. I’m not a historian, so I’m not sure if they ever went so far as Texas. Then again, Texas is a huge place. They are frozen mid-battle with what looks to be Native Americans. How’d they end up in a cave in Texas?

Another question that comes up is the technology that creates the time trap. We never learn of its nature. Even the future civilization doesn’t appear to know the mechanics of the time trap, and I don’t think we learn anything substantive about it.

The group’s discovery of the time mechanic also adds another dimension to the movie. This is an ingenious way to “upgrade” the plot to something more than characters stuck in a time bubble and then finding a way home. For the characters, there’s no way to move but forward in space and in time.

The conclusion of the movie leaves me with more questions than answers. We never learn how or why the planet became the way it was. I suppose it’s reasonable to assume that climate change was the culprit.

What’s also a bit disappointing is that we see this amazing technology, but we don’t get to see the people behind it. Nor do we get to see anything at the end of the movie that illustrates the technological level that humans have achieved. Obviously, the future learns of the time bubble, but even the future is unable to stop it or release those trapped in it.

These minor concerns shouldn’t detract from the overall movie. I’d highly recommend Time Trap if you’re in the mood for a thought-provoking science fiction movie. Of course, if you love time travel stories, then you’ll like this movie even more.