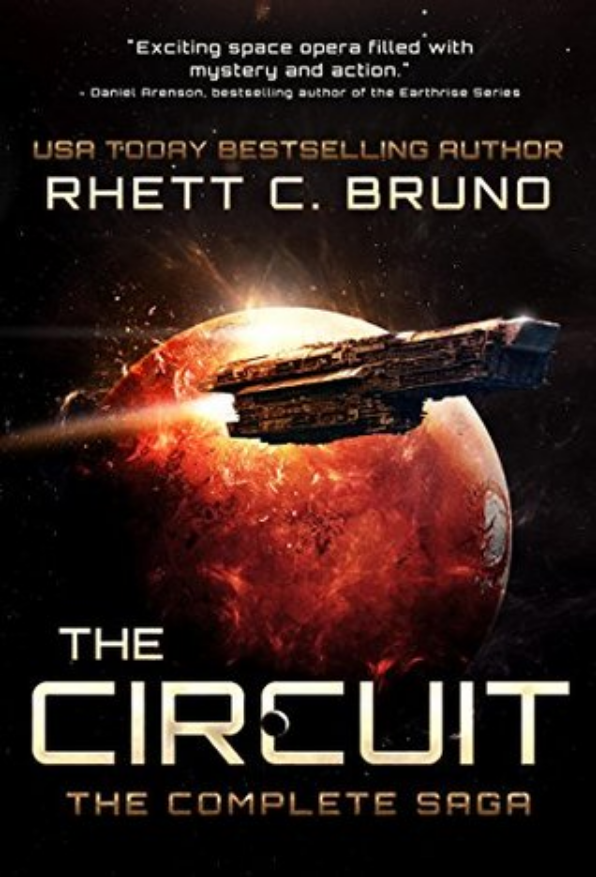 The Circuit: The Complete Saga (Books 1-3) by Rhett C. Bruno

Cassius Vale plans to overthrow the Circuit and force humanity to follow its destiny to the stars.

The Circuit: The Complete Saga Review

The Circuit: The Complete Saga by Rhett C. Bruno is a slow-moving story that takes its time to establish the context that will eventually capture the reader’s attention. While the first book felt a little slow because of its establishment of the universe, the following books similarly felt as though they moved along in a plodding manner.

It’s almost as though the pacing of the story matches the methodical planning of Cassius Vale, the antagonist of the story. Or one of the heroes, depending on perspective.

My lasting impression about the book is that its atmosphere and tone reminds me a lot about The Expanse series of books. The similarities are fairly clear: both universes include people who populate the solar system with slow (relatively speaking) vessels. Both have asteroid-belt residents who are discriminated against and oppressed by the “ruling” elites who live within the inner planets.

And that gritty realism of space battles with missiles, rail guns, kinetic weapons, and boarding parties gives the story a feeling of hard science fiction that The Expanse illustrates. But whereas The Expanse goes beyond the solar system, humans in The Circuit are trapped within the solar system due to their dependence on Gravitum, found only on the dead planet Earth. Along with the dependence on Gravitum, humans no longer have the desire or aspirations to move beyond and explore the universe.

It’s the absence of reaching for the stars that provides the motivations for Cassius Vale and the methodical plan that he unleashes throughout the series. Of course, readers are constantly reminded of Vale’s dead son.

People say that time heals all wounds, but that’s not the case for Cassius. While the woman who was supposed to become his daughter, Sage Volus, has moved on, Cassius reminds stuck on his vengeance much like the last plant kept in suspended animation on Mars by the Tribune. It’s when both the plant and Cassius are exposed to reality that all comes crashing down.

What The Circuit also does well is that it illustrates a scenario science fiction writers often ponder with regards to androids and robots: will androids one day rebel against their creators? Seasoned science fiction readers will likely wonder this as they read the series. After all, how many stories contain robots run amok, and how many movies have robots or AIs enslaving humans? ADIM’s story is both one that is inspirational in its character growth and tragic in its conclusion. Ultimately, ADIM’s story perfectly represents the pride and the fall that led humans to their present-day predicament when the story of The Circuit begins.

If there’s one major issue with the story, it’s that the slower pacing of the saga requires a large time investment from readers, and while there’s a conclusion to the story, there’s also a sense of something missing once the saga concludes. Bruno takes his time illustrating a story rich in context: Earth and Gravitum, the Circuit, the Solar-Arks, the colonies, the people, the politics, and daily life for those who live in the far reaches of the solar system.

And it’s this rich context that makes the conclusion difficult to accept: what will happen to these people with the fate of Earth now sealed? What will happen to a people whose entire social and political structure have been upended? While the story attempts to suggest a destiny for humanity that human ancestors prepared for, one can’t help but feel cheated out of the fates of the surviving characters.

The Circuit: The Complete Saga by Rhett. C Bruno is a story with a pacing that slowly immerses readers in a universe that is rich with detail. Readers who enjoy context in a science fiction story will find solace in The Circuit: The Complete Saga. It’s a story that is driven by characters and their motivations, as well as by their faults, and in a sense, it’s a return to the type of science fiction that is more an extension of the realm of human experience.