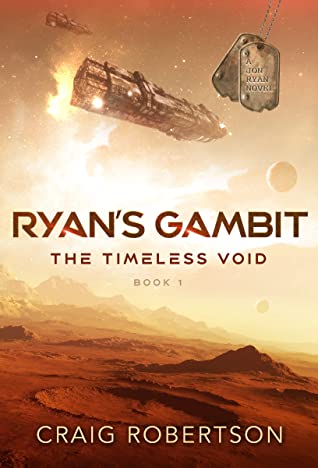 Jon Ryan and Sapale embark on another dangerous mission to save the universe from time-eating aliens who threaten to remove Earth from time itself.

Ryan’s Gambit by Craig Robertson is the start of yet another fun adventure starring a lovable protagonist who does not take seriously the threat posed by his adversaries. Ryan’s jokes and easy-going attitude throughout the story takes the edge off the otherwise heavy threat of human extinction—or rather, the disappearance of human existence in time since extinction assumes an extant history.

One interesting change in this series is the presence of humans, a species that was sorely missing from previous series because Ryan’s long period of sleep catapults him billions of years into the future. In some ways, humanity’s return to the story is a little confusing considering humanity’s absence.

Whereas the threats that Ryan faced in previous series were all present threats, The Timeless Void series finds Ryan facing a race of aliens with technology that is impervious to Ryan’s billion-years-in-the-future technology. This new (or old) technology, depending on perspective, means that the Ryan’s standard solutions of blowing things up with his vessel no longer works. Instead, he has to blow things up with another vessel.

One of the enjoyable aspects of Ryan’s adventures is not necessarily that he faces ever increasingly difficult enemies—advanced aliens hordes, ancient gods, and now, time-manipulating aliens—it’s that he faces them with a sense of humor, however puerile, that mitigates the otherwise heavy threat of galaxy-wide extinction.

Of course, the various interesting aliens, the super advanced technology, and the seemingly overwhelming odds add to the joy of the story. Interestingly enough, Ryan’s constant companion and artificial sentience Al, isn’t with Ryan for a good portion of the book. Whether or not that’s a positive will depend on how much readers enjoy the bickering between the two—there’s just enough at the beginning to appease most fans. Those fans who miss Al will find a replacement in the time ship AI, who is just as snarky.

In previous stories, Ryan transcended the boundaries of the solar system, galaxies, and even dimensions to fight his enemies. This time, however, Ryan has to master time itself in order to best the aliens simply referred to as the clan, a group of aliens in control of a fleet of time-eating ships. While not much is known about the aliens or the ships, what details are revealed lead to some fascinating ideas about the creators.

As with many time travel shows and stories, there are some limitations—shows like Doctor Who bypass the whole grandfather paradox by establishing a self-imposed rule against meeting oneself in the past. The same is true for this story, though those rules seem less severe. In fact, a few time paradoxes are ignored in the plot.

Ryan’s Gambit by Craig Robertson is another engaging battle between Jon Ryan and the evils of the universe. While readers don’t see what Ryan’s gambit is in this story, it’s sure to appear soon as the conclusion of the novel doesn’t bode well for humanity.

Read reviews of other works by Craig Robertson below.