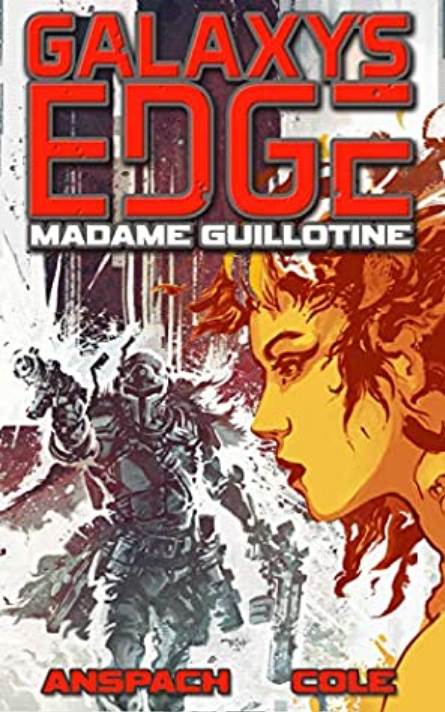 Tyrus Rechs defies a Republic blockade to save some legionnaires who have been captured by protesters.

Madame Guillotine by Jason Anspach and Nick Cole will continue to regale readers with the action-packed scenes that readers have come to expect from the Galaxy’s Edge series.  Furthermore, learning more about Tyrus Rechs makes the story all the more appealing given his role and fate.

There’s not much to dislike about the story save for the one flaw mentioned above. The authors deliver a solid story that entertains the reader and delivers the same fast-paced action that makes the story move quickly.

There is a stark contrast between the male legionnaires and the female marine. There aren’t very female heroes in the Galaxy’s Edge universe that stand out, and what few there are aren’t very distinguished from their male counterparts. Outside of the crying, there’s not much to distinguish her gender.

While the motivation for the plot seems a little unlikely一Rechs jumps into the fray in an attempt to rescue some seemingly nondescript legionnaires一the story is still fun and the motivations for Rechs are all in the right place for his character.

There’s a lot in the first half of the book regarding protesters that does give a sense of disillusionment about the story. It’s not so much that there are protesters in the Republic, especially given the state of the Republic described throughout the books in the Galaxy’s Edge universe.

But the narrator’s sometimes mocking descriptions and often dismissive attitude toward the protesters feels like a social commentary that might have been better left out of the story. This is especially more pronounced as these comments are made outside of Tyrus Rechs, but they’re easy to confuse with Rechs considering he’s the protagonist.

Given the protests that have taken place in the past few years, it’s difficult not to separate the story from current events. For instance, the narrator faults journalists in the story for inciting protesters through their reporting and for not stopping the violence. It’s simple to place the blame on one party, but the reality is that everyone shares a little bit of the blame.

It’s a confusing and sometimes conflicting message the book sends regarding the idealism and naivete of the protesters and the manipulation of these protesters by some hidden party. The disparaging remarks about the protesters and their demands for a more equitable society seems out of place considering that Rechs desires that same ideal future. The result is a bias that can feel a little heavy-handed at times.

What the story does well is to flesh out a character whose background in the main Galaxy’s Edge series was intriguing and mysterious. Rechs is a relatable character in that he’s a hopeless romantic, but it’s this quality that motivates him throughout his extended life and makes him appealing to readers. So learning more about him and his crew makes him that much more interesting.

Madame Guillotine by Jason Anspach and Nick Cole is a fun military science fiction story that can sometimes feel a little confusing regarding the messages the story is trying to convey about the state of the Republic and the need for change. But readers who already have a negative view of protesters, along with readers who can ignore the commentaries, will find the same level of excitement from other books in the series.

Read reviews of other works by Jason Anspach or Nick Cole.