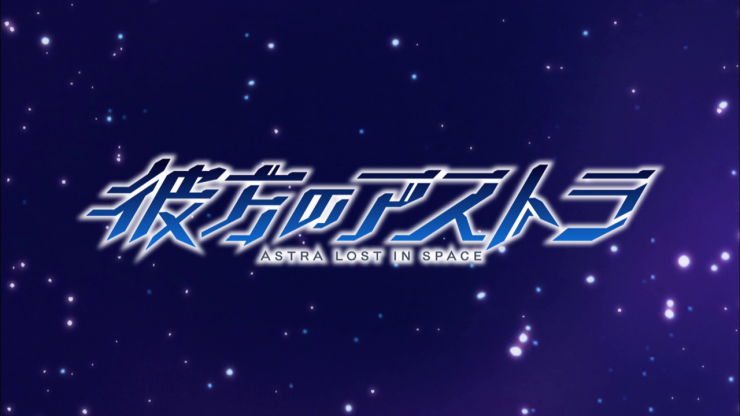 Kanata no Astra has a lot of potential to expand upon the science fiction genre in anime.

Watch this anime if you

Avoid this anime if you

You may also know this anime series as Astra Lost in Space. Airing during the summer of 2019, this is one of the few shows this season with a major science fiction theme.

This review is only after watching the first episode. I know that’s not enough time to give the series a fair review. I’ll adjust this review if I continue.

See edit below for response to the second episode.

This series isn’t new in that it still contains one of the common cookie-cutter story plots: a group of high school students go on a trip and face some kind of adversity.

Also present are the character stereotypes. Zack, the smart and arrogant glasses-wearing male type. Think Shiroe in Log Horizon. Bonus: I don’t think he adjusted his glasses once during this episode.

Funicia and her puppet Beego bring an interesting twist to the animal companions that many writers tend to use as comic relief.

The dialogue and humor don’t really stand out apart from the Funicia and her alter ego, Beego. Beego’s sudden appearance, as well as his harsh language, was a bit of a surprise.

Some of the scenes in the anime are reminiscent of Hollywood blockbusters like Gravity. In this image below, you’ll see Aries, one of the students, floating in space.

It’s this scene that reminded me of Sandra Bullock in Gravity. The lens flare may be overdone in movies, but they’re an unexpected treat in an anime series.

Soon after the students debark for their school trip, they encounter some strange sphere that teleports them far away from the planet.

When they awaken, they find themselves floating in space, with a fully functional spaceship nearby. The plaque on the ship reads “PER ASPERA AD ASTRA,” which translates from Latin to “through hardship to the stars.” Kanata decides on Astra for the ship name.

The biggest plot weakness is the presence of the ship. The ship, with Latin phrase printed on a plaque, seems a bit contrived. What are the chances that a spaceship is right there when they come out of some strange wormhole? The students discuss this very issue, but I hope it’s dealt with later in the series.

Armed with only what they brought along for their short school trip, the group must find a way back home.

The plot reminds me of Star Trek Voyager. Both the students and Voyager are trying to make their way home after being thrown far away by some phenomenon.

But unlike Janeway and her trained crew, the Astra has nine high school students who come with various backgrounds. None of those backgrounds seemingly include piloting or maintaining a spaceship. One of the students is studying to be an artist.

The group soon learn that they can’t travel for more than 20 days without stopping to resupply. As a result, they have to plot a longer route home because of the need for habitable planets.

The plaque on the Astra foreshadows a rough journey ahead for the crew.

I think it’s because this anime reminds me of Gravity and Star Trek Voyager that my expectations ran a bit higher than they would have. It may be unfair to Kanata no Astra to judge the series by those standards.

I suppose that’s why a lot of anime shows avoid science fiction. When the majority of characters are middle school, high school, or even college students, it’s difficult to write in the experience that is necessary to explore and study space.

Still, the story medium is forgiving, and it’s only the first episode, so many questions are likely to be answered later. In another medium like a novel, these questions would be front and center for more a discerning audience.

Despite the questions the first episode raises, it’s refreshing to see a more serious science fiction anime series rather than a mecha action anime with space as the background.

There’s some character development going on. We learn more about Quitterie and Funicia. And we learn a bit more about Kanata.

I hope that the series doesn’t spend too much time delving into the past for the remaining characters. While flashbacks are an effective method of showing character depth and history, they don’t do much to progress the story.

My personal preference is that the characters are revealed through their actions rather than their pasts. And that’s simply because people change. Kanata’s saving of Aries in the first episode and his saving of Funicia in the second episode are a better reflection of his character than his flashbacks.

The mystery is deepened when Zack reports that someone expertly removed a communications chip from the Astra’s electronics. This, combined with the convenient presence of the Astra after the transport, does make the plot a bit more mysterious and intriguing.

If you’re looking for a light science fiction story with some mystery, then maybe Kanata no Astra is a good choice this season. But there are better choices if you haven’t watched many science fiction anime series. Steins:Gate comes to mind as one that you should watch.

Finally, was anyone else thrown off my Aries’ laugh when the group was analyzing the food they gathered? That was the most memorable part of the episode for me.