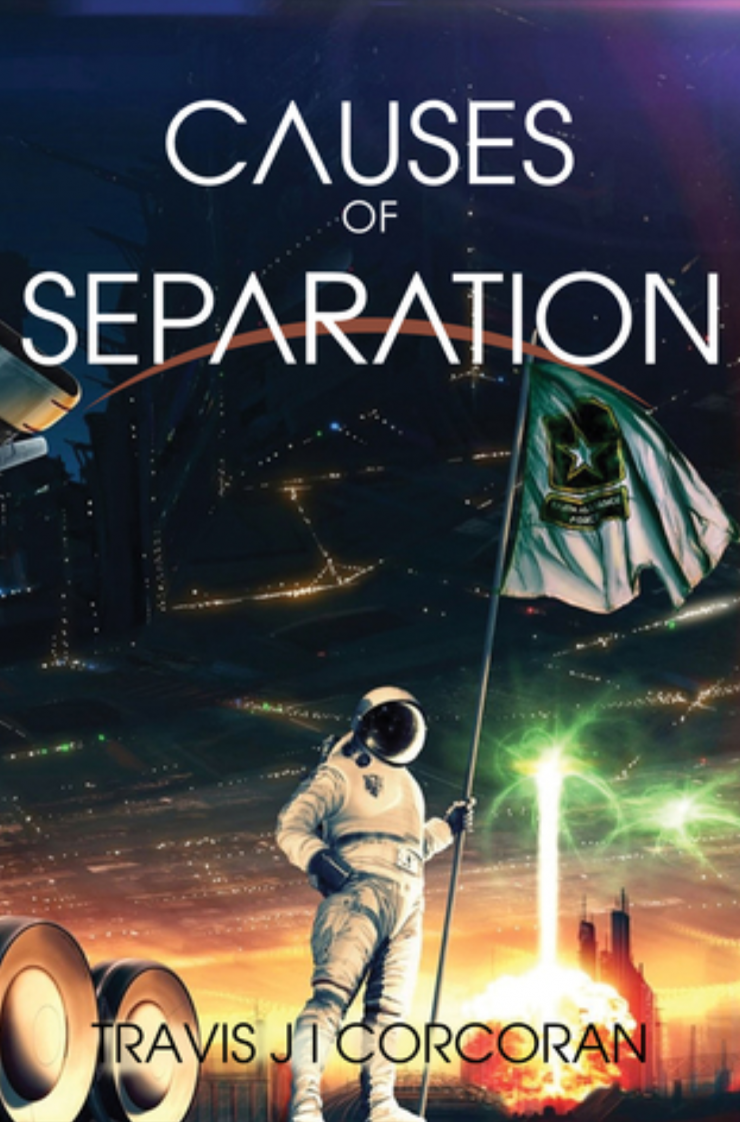 Causes of Separation (Aristillus Book 2) by Travis J. I. Corcoran

The woefully unprepared and unequipped residents of Aristillus have to defend themselves against a military takeover of the colony.

The CEOs of the various companies on the colony of Aristillus have to defend themselves against Earth government’s attempt to reclaim the colony. These lunar expatriates see themselves as a separate entity from Earth and its governments, but the United States doesn’t agree.

People from all over Earth are leaving the planet to go to the moon colony of Aristillus thanks to open-sourced antigravity drive plans.

The US suffers from a lack of resources, and the president believes that capturing the stores of gold and resources from Aristillus will secure her next election victory.

Mike Martin is the CEO of Morlock Engineering and the de facto head of the group of CEOs who run Aristillus.

President Themba Johnson and Senator Linda Haig are locked in a power struggle to win the next presidential election. Meanwhile, General Restivo has to organize an invasion force to take over Aristillus.

The dogs and Gamma play a more prominent role in this book.

The story takes place on the moon colony of Aristillus and its various underground levels. Some events take place on an island on Earth.

Causes of Separation is an improvement over the first book in the series, The Powers of Earth by Travis J. I. Corcoran.

Corcoran expands on some of the more lacking aspect in the first book of the series. For instance, we learn more about the dogs and their species in this book. I enjoyed learning that there was a small, viable colony of dogs in Aristillus, though their politicalization made me feel a bit anxious. But this conflict among the dogs does add to some interesting potentials in the series. I imagine we’ll see more of this in the third book.

I really enjoyed the military aspect of this book. In most science fiction stories, battles take place on the planet or in space between two opposing factions, usually humans and aliens. Having the conflict be between humans is a bit dull.

I genuinely felt some anger learning that the PKs were willing to attack and harm civilians on the moon. Corcoran’s demonization of these mercenaries makes them a good antagonist in the story. The PK’s association with the United States and the president makes the whole Earth government that much more despicable.

But not everyone who is invading the moon is evil. General Restivo gradually forms some doubt about the propaganda campaign on Aristillus. His invasion of the moon reveals to him that just maybe he’s not on the “good guy” side of the invasion. This doubt is strengthened when he learns the extent of the action his troops are willing to take in order to win.

There’s a lot of political intrigue in this series. Much of that is centered on President Themba Johnson and her attempt to maintain and cement her grip on the presidency of the United States. Meanwhile, Senator Linda Haig works in the background to challenge and win the next election.

We learn a little more about the United States and the worldwide governments on Earth. They appear to be suffering from dwindling resources and a lack of technological advancements due to regulation, bureaucracy, nepotism, and corruption. These factors serve to stymie technological innovations. Aristillus, however, has no such corruption or regulation, and the people and businesses on the moon thrive due in part to necessity and free market competition.

Despite the appearance of a more fair distribution of resources, large inequities still exist. That’s because the government controls almost all aspects of society through various departments. Nepotism and corruption ensure that only a select few get any lucrative government or military contracts. In essence, the governmental systems in place still benefit the few highly connected people while the majority of the citizens struggle. So not much is different from the real world, I suppose.

In contrast, Aristillus appears to be the polar opposite of the United States government. There are absolutely no rules, but the companies keep one another in check. Unchecked capitalism appears to work on the moon. There’s not even a standard policing policy in place, so each company maintains its own police force and regulations. This seems like a recipe for trouble, though it’s not the case in the story.

I find it a bit difficult to accept that people are able to behave very well without any laws. But maybe before the open-sourcing of the drive plans, Aristillus had a very selective immigration policy. Certainly, the only people who can go to Aristillus would be the ones who were technically skilled enough to build the antigravity drive. So the only people who would emigrate would be intelligent.

In many ways, the government and political establishment on Earth is heavily criticized while the absence of an authority in Aristillus is praised. Maybe because we see the story through Mike Martin’s perspective that the United States government is so negatively portrayed.

I’m happy to learn that we read more about the dogs. Gamma is still a mysterious player in this book, but I imagine we’ll learn a lot more in the next book.

Overall, the book expands on and answers many of the questions from the first book in the series. If you were unsure about whether to continue with the series, then I’d highly recommend you at least read Causes of Separation before you make any definitive judgement. I think you’ll discover that this book is a big improvement.

Read reviews on other books in the Aristillus series.