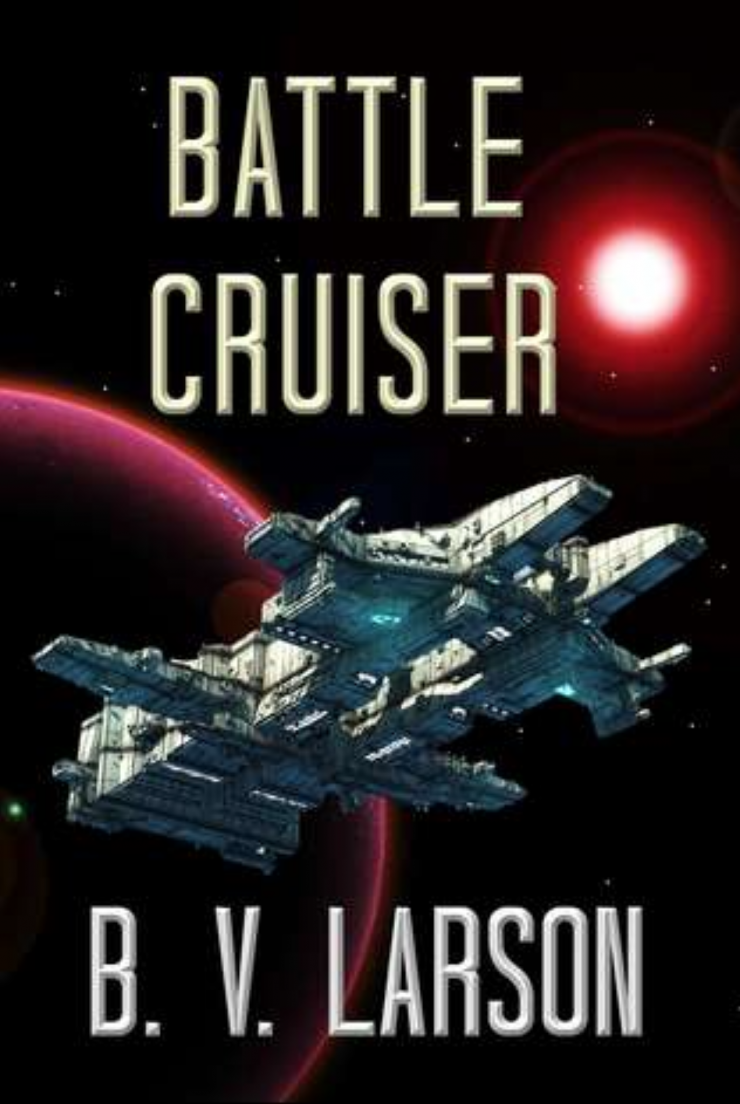 Earth is finally reconnected to its colonies a century after the wormhole connecting the worlds collapsed. But the colonists have all changed culturally, physically, and technologically, while Earth has stagnated. Earth must reconnect with its colonies and defeat a threat to the human species.

Battle Cruiser is the first book of the Lost Colonies trilogy written by B. V. Larson. Fans of Larson’s works such as Undying Mercenaries or Rebel Fleet may be a little disappointed if they’re expecting fun, womanizing characters—William Sparhawk is a much more mature commander, though he does lack personality as a result.

The closing of the wormhole near Earth blocks travel and communication with the rest of Earth’s colonies, and for a century, the planet remains isolated. As a result, Earth remains stagnant and embroiled in its own politics while the colonies grow, both in population and technology.

One day, a large, technologically advanced vessel appears in space above Earth, and humans are united once more with their lost colonies. Only this time, there’s a war waging among the colony worlds, and the aggressor threatens to wipe out all of humanity and its colonies.

The main characters are William Sparhawk, captain of the Cutlass, a small pinnace, his small crew, and his Chief, Rumbold. Joining him is Zye, a Beta human colonist. Other characters include Captain Singh, Sparhawk’s commander, and Sparhawk’s father, a prominent leader in Earth government.

The story takes place on Earth and at various colony systems.

I did enjoy B. V. Larson’s Battle Cruiser story even though I felt that the protagonist, Sparhawk, was really stiff and dull at times. Unlike the protagonists of Larson’s other works, like Undying Mercenaries, Sparhawk is as straight as any other military officer, perhaps even more so given his father’s leadership in the government.

One of my complaints about McGill in Undying Mercenaries is that he’s sometimes just too much. His comments about a woman’s shapes or sleeping with other women is just too exaggerated sometimes, making the some passages difficult to get through. But Battle Cruiser has the opposite problem with the protagonist: Sparhawk can be too boring at times.

While Sparhawk is a little stiff, he does share some traits with other Larson protagonists: namely, Sparhawk can be very creative in his interpretation of the orders he receives. This character quality does allow the story more flexibility, and it provides a good contrast between the rigid military structure and the flexibility that a changing battlefield demands.

The other human colonists, like Zye the Beta, seem interesting enough. I’m not sure how or why everyone from that particular colony would choose to change since it seems more likely that some would choose to adapt while others would choose to maintain their original features. That the ships or colonies are all changed seems unlikely.

I didn’t find the premise of the story to be unique, though the book was enjoyable once I was able to adjust to the change in writing style and and protagonist. The antagonists are believable enough, though I’m not sure if a century of isolation can result in such drastic changes, but Larson’s stories aren’t really hard science fiction.

What Larson does really well with his writing is to deliver fun and enjoyable stories. These stories may not leave you with the same sense of wonder that a movie like Arrival manages to do, but you’re not likely to be disappointed either.

Read other reviews on books by B. V. Larson: