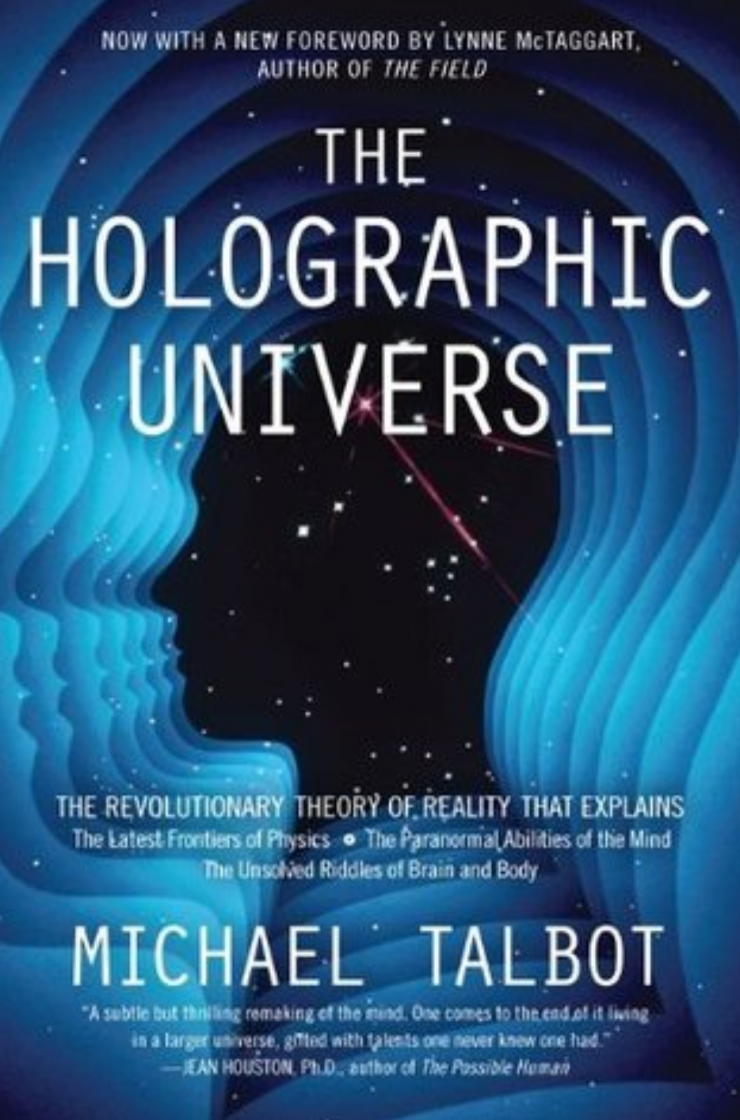 The Holographic Universe The Revolutionary Theory of Reality by Michael Talbot

Talbot unites various phenomenon such as telepathy, paranormal, telekinesis, and other seemingly unrelated and esoteric fields under one theory that explains our reality.

When Talbot proposes a theory of reality, he really means it. The seemingly different and unrelated subject matter appears to be surprisingly interconnected given Talbot’s presentation of the holographic theory.

What lends the holographic theory of reality more credence is the fact that it’s able to explain so many unrelated phenomena that is reported throughout history and ignored by traditional scientists because such phenomena contradict standard scientific models.

Of course scientific models change. A look at our own history reveals the advancements the Greeks made along with the Western world’s rising out of the dark ages with people like Galileo.

This book provides a convincing argument for the holographic theory, and even if you’re a huge skeptic, the cases that Talbot discusses are fascinating enough to merit further study.

If you’ve read my reviews of other non-fiction works here, then you’ll know that I approach most books or topics with an open mind. I wasn’t aware of the holographic theory when I picked up this book. But I did have a vague, layman’s understanding of string theory. And I was familiar with Briane Greene’s work The Elegant Universe.

The Holographic Universe by Michael Talbot reads like a serious study into a possible nature of the universe. Its hypothesis is supported by research from various physicists, psychologists, and other seemingly reputable scientists. Admittedly, I didn’t look up the background information of the people mentioned in the book, but Talbot doesn’t appear to be deceptive in any way.

What Talbot proposes is that the universe is a hologram created by the interference pattern between waves. Our brains assist in creating this hologram, and our understanding of the material universe is wrong.

The foundation or support for the holographic theory comes primarily from the works of the physicist David Bohm. Talbot brings in research from other disciplines, like from the neuroscientist Karl Pribram. That’s what makes this book exciting: research exists from different fields that substantiate or lend credence to a singular, unifying theory of reality.

Talbot moves beyond physics and neuroscience and goes into other ideas like lucid dreaming, parallel universes, and even disorders like multiple personality disorders. Talbot’s ability to explain his theory and integrate science makes his case that much more credible and convincing.

Some of the fascinating aspects of the book are the medical discussions. The cases of Michelli, who was diagnosed with cancer that was literally disintegrating his bones. Doctors had no cure, so they sent him home to prepare. Not only did the cancer disappear, but his bones regenerated within 10 months without any medical intervention.

Talbot attributes these kinds of miracles to the power of faith, or more particularly, to a power of the mind. He then relates how the holographic theory can explain such events or situations.

Talbot’s research into the various cases throughout history and into modern times really help advance the power of his theory. The theory is consistent about explaining various disparate phenomena ranging from medicine to the supernatural.

One big takeaway from the book is what Bohm calls the implicate order. Carl Jung calls it the collective unconscious. Religion may call this god. Some new age books may call it the divine consciousness or the divine being.

Regardless of the label, they all refer to the same idea: that there’s something that contains the knowledge of everything, and this thing permeates the universe. What’s fascinating is that people have access to this implicate order, as Talbot illustrates in instances throughout the book.

It’s difficult to accept a theory about reality that contradicts what we experience in our lives. Saying that reality is a hologram will be difficult for some readers because of the preconceptions people have about holograms from science fiction.

Talbot provides a fascinating look into a plausible explanation of our universe. What’s more, he’s able to point to different examples throughout history and across different disciplines to support and explain his theory.

The only thing that I think would make this book better is an update that includes more recent research and findings. Many technological advancements were made since the publication of this book in the 1991. Maybe these advancements and the experiments they’ve enabled can shed more light into the nature of our universe and reality.

1992 Michael Talbot The Holographic Universe The Revolutionary Theory of Reality