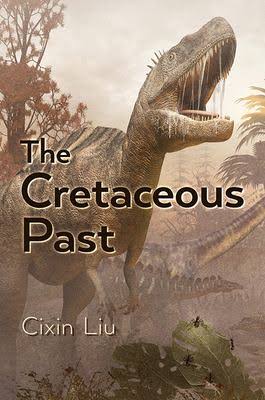 Ants and dinosaurs form an unlikely alliance that carry them into a future that is hauntingly similar to the course of human history in this work of speculative fiction.

The Cretaceous Past Review

Cixin Liu’s The Cretaceous Past is an imaginative study in the co-evolution of two unlikely species: ants and dinosaurs. Like many of Liu’s story, the narrative voice can be more expository than entertaining, but any flaw with the voice is more than made up in the story that can serve as a warning against the current policy of mutually assured destruction adopted by nuclear-equipped countries.

Perhaps the premise that is most difficult to accept is that both primitive dinosaurs and ants have the capacity of association, something that mammals today, like domesticated cats and dogs, lack. But accept the premise that these early lifeforms on the planet can form complex thoughts, and the story takes an interesting course.

Some insightful and creative approaches to an ant and dinosaur co-dependence make the the story delightful and entertaining. For instance, the dinosaur’s enormous relative size to the ants allow the ants to easily perform simple cleaning and medical procedures.

It’s this simple cleaning task that the ants perform—and they benefit from the ease and convenience of food stuck between teeth—that launches two co-dependent civilizations into a technologically advanced future not too different from our own space-exploring society today.

It’s difficult to ignore the parallels between the dinosaurs and ants to the two world superpowers involved in the Cold War, and the political commentary made through the story’s conclusion is fairly clear and bleak: the policy of MAD, if taken to its logical conclusion, can only result in purge of all life on the planet and a reset of civilization.

Imaginative battles that occur between the two species are fun to read, providing readers with intriguing insights into how something as small as an ant can tackle something as large as a dinosaur.

There’s not much dialogue in the text that gives readers an opportunity to relate to the characters since there’s no singular main protagonist that spans the entirety of the book. Instead, the characters are the two species, a group collective, so to speak. What’s interesting is that the ants are selfless, putting their own lives at risk for the greater good.

The characters in the story are ants and dinosaurs, and in a sense, this speculative fiction story is more of an adult fable than any other genre. Readers are encouraged to take the story’s lesson to heart, for the fate of the two species can easily be the fate of humanity.

The Cretaceous Past by Cixin Liu is a creative and fun story of two species in Earth’s distant past who, at one point, reached the stars through their dependence on each other, only to fall from their great heights because of distrust and greed.

Read reviews of other speculative fiction books below.

2021 Cixin Liu The Cretaceous Past