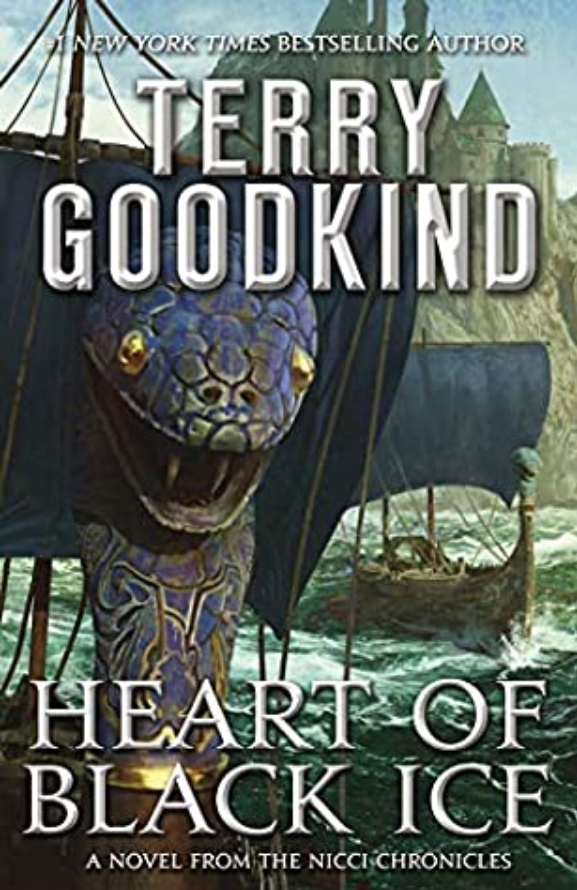 Nicci, Nathan, Bannon, and their friends must defend the world against General Utros and his stone army while the Norukai, led by King Grieve, continue their constant raids.

Heart of Black Ice by Terry Goodkind provides a fairly satisfying conclusion to Nicci’s adventure in the Old World. This book, and the entire series, engages readers with plenty of desperate situations, satisfying battles, and illustrations of camaraderie.

Nicci, Nathan, and Bannon must defend the Old World from old and new enemies. General Utros and his massive army roam the lands, while the savage Norukai raid towns and villages.

Nicci, Nathan, and Bannon are joined by Lila and a few other minor characters to defend the Old World against King Grieve and General Utros.

The fight takes place in the Old World set in the Sword of Truth universe.

I’ve been a fan of the Sword of Truth series ever since I read the first book, Wizard’s First Rule during my freshman year of high school. And to this day, I still get a sense of excited anticipation when I pick up another book from that universe.

Heart of Ice, book 4 of the Sister of Darkness: The Nicci Chronicles, continues to deliver that same great storytelling fans of Terry Goodkind have come to expect and enjoy. What Goodkind does very well is put characters into desperate, seemingly hopeless, situations and then allow the characters to triumph through courage and adversity.

This pattern is repeated again and again throughout Heart of Ice with Ildakar, General Utros, King Grieve, and other villains in the series. The pattern doesn’t bore, though. In fact, the style of writing and the obstacles and solutions are engaging enough to mask such a story structure.

One criticism I have about this book is that the author has a tendency to be repetitive or to restate ideas presented in earlier in the series and in the book. For instance, Nicci’s mission and her feelings for Richard are repeated throughout the book, giving the story a frustrated quality. It’s not too different from how I felt about the long passages in Faith of the Fallen, a book I only completed out of a sense of duty to the characters and the series.

Luckily, these moments of redundancy don’t last long, and the characters are soon back in action fending of one horde of enemies or another. The challenges each character face are resolved, and the various story arcs converge fairly seamlessly into a final battle.

Like other books in the series, the battles are savage, and creatures, swords, magic, and other surprising elements appear to keep the battles interesting. Some discussion of strategy give readers the sense of hope and make victory seem all the more probable (and believable).

However, the manner in which the main story with General Utros is resolved leaves a lot to be desired. It’s the other criticism I have about Heart of Ice. So many pages have been devoted to the ferocity and strength of the army, and the way in which the army is dealt with left me feeling empty and wanting.

I’m quite satisfied with how the series concludes in Heart of Ice outside of how General Utros is handled. The book resolves all the smaller story arcs well, leaving readers with a sense of conclusion for an otherwise fun and action-packed adventure in the Sword of Truth universe.